Tabadul: Reflecting on our Experiences through the Arts

Our annual $25,000 prize is awarded to a cutting-edge idea that holds the potential to catalyze progress in behavioral health.

Contact Joy with any questions about the Scattergood Foundation.

Richard G. Frank, PhD, is the Margaret T. Morris Professor of Health Economics in the Department of Health Care Policy at Harvard Medical School. From 2009 to 2011, he served as the deputy assistant secretary for planning and evaluation at DHHS directing the office of Disability, Aging and Long-Term Care Policy. From 2013 to 2014, he served as a Special Advisor to the Office of the Secretary at the Department of Health and Human Services, and from 2014 to 2016 he served as Assistant Secretary for Planning and Evaluation in the Department of Health and Human Services. His research is focused on the economics of mental health and substance abuse care, long term care financing policy, health care competition, implementation of health reform and disability policy. Dr. Frank served as an editor for the Journal of Health Economics from 2005 to 2014. Dr. Frank was awarded the Georgescu-Roegen Prize from the Southern Economic Association, the Carl A. Taube Award from the American Public Health Association, and the Emily Mumford Medal from Columbia University’s Department of Psychiatry. In 2011, he received the Distinguished Service Award from the Mental Health Association of Maryland. Dr. Frank also received the John Eisenberg Mentorship Award from the National Research Service Awards. He was elected to the Institute of Medicine (National Academy of Medicine) in 1997. He is co-author with Sherry Glied of the book Better but Not Well (Johns Hopkins Press). 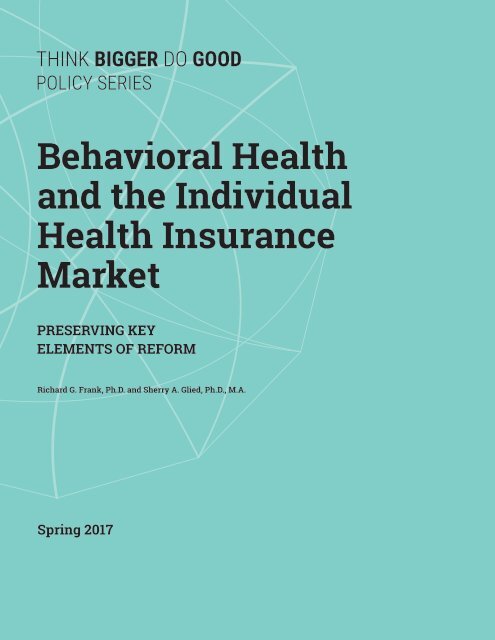